How to Get that Median Subassembly Working For You 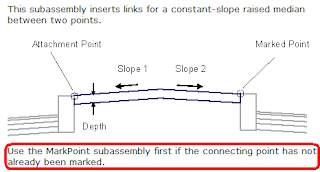 We need to add the "MarkPoint" subassembly to the assembly. Before doing this, I will change the properties of the "MarkPoint" so that the Point Name and Point Codes are named something that makes sense to me. In this case, I used "Median-RT" for both.

Select the "MarkPoint" subassembly, right click, add to assembly. Select the circle at the back of the curb on the right side of the median.

Select the median subassembly, right click, add to assembly. Select the circle at the back of the curb on the left side of the median.

Well, that should do it for creating an assembly with a median. Now you might be asking yourself why I didn't just add the subassemblies directly from the Tool Palette. Unfortunately, that will have to be answered in a separate post. 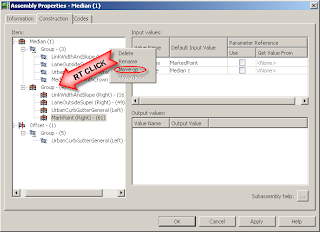