Have you ever had a label that looked like this:

In the Dragged State tab of the Label Style Composer, set the Leader Justification setting to false.
Posted by TommieR at 12:31 PM No comments:

Since this is a repeat question in my office, I thought I would share the solution with you. Here are two possible scenarios:

You might even find that if you try to execute a move command on either the polyline or the line from Step 1 or Step 2, they won't appear to move because the elevation doesn't change.

Do you know what the problem is?

The view has been changed to something other than "Top".

To correct the situation, just type -view at the command prompt and then top to reset the view. You can also find the solution in the dropdown menus at View-3D Views-Top.
Posted by TommieR at 1:24 PM 3 comments:

So you're publishing in the background and you need to "plot something real quick". You hit the old plot button and you're faced with this message: 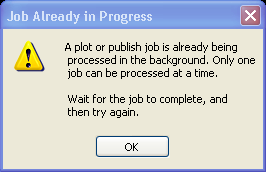 Open a second session of Civil 3D and plot from that session.

Yes, it's that simple.

I've been experimenting with using multiple sessions of Civil 3D 2009 and so far it seems more stable (knock on wood). So when I was faced with publishing a sheet set with a portion of the set using one page setup and the other portion using a different page setup, I gave the multiple sessions a try and it's working like a dream.

For this process, I have the 3GB switch enabled and I'm using Windows XP. I have my publishcollate variable set to 0 (zero) so the sheets are intermixed. I could have set my publishcollate variable to 1 (one) and the plot would have sent as one file then I could have the sheets in order for easier collating in the end. Since I had never tried to publish from multiple sessions of AutoCAD, I chose not to collate before sending to the printer. This way I could verify that the process was indeed working.
Posted by TommieR at 5:55 PM No comments:

Hopefully everyone knows about the xlist command. It returns the object type, layer, color, and linetype of an entity that is in either a block or an external reference drawing. Sometimes the resulting dialog box isn't large enough to read the layer name so give this a try:

This command will give you the same information, but the result appears in the command line instead of a dialog box. It's also helpful when you're trying to find a layer in a layer list to either change the color, lineweight, or plot style. By having the results in the command line, you can still read the layer name while your browsing through the layer manager list.
Posted by TommieR at 8:24 AM No comments:

Do You Have What It Takes?

If you think you have what it takes, or even if you just want to get a jump start on the new technology, Jack Strongitharm (otherwise known as Junction Jack), has blogged instructions on how to join this year's beta test program for Civil 3D. It's not too late to test the new features before the final product hits the shelf, but you better make it fast.
Posted by TommieR at 3:22 PM No comments:

Here is a link to view the recorded Autodesk 2010 AEC Press Release Webcast. You can also download the AEC 2010 Launch Press Materials. The zip file contains information on the following Autodesk 2010 products:

Posted by TommieR at 7:44 AM No comments:

For a quick look at some of the AutoCAD 2010 PDF capabilities that I discussed yesterday, there is a video posted on YouTube.

Thanks to Shaan for posting this one.
Posted by TommieR at 8:50 AM No comments:

You can view recorded videos and download the 2010 Launch Press Materials here. There will be additional press releases today for the verticals (including Civil 3D). The videos will be posted and ready to view by everyone early next week using the same link.

Be sure and check Shaan's Between the Lines Blog for a link to today's webcast at 11am EST. Today's webcast will include a look at the Architecture, Engineering, Construction, Utilities and Geospatial 2010 Autodesk Product Line. This includes a look at Civil 3D.

Also, the AutoCAD 2010 Launch Press Materials zip file includes some information on Civil 2010 (not Civil 3D 2010) since this product is built on AutoCAD, not AutoCAD Map. Hmmmm, might this be a sneak peak at Civil 3D 2010? We'll find out later today.
Posted by TommieR at 8:04 AM No comments:

I hope many of you were able to view the Autodesk 2010 Product Release Webcast today. If not, Shaan Hurley has posted a link to the webcast on his blog. The webcast was recorded and can be viewed by anyone willing to provide your name, company name, email address and accept the privacy statement. There will be another webcast on Friday, February 6, at 9:00 am PST. Details can be found on Shaan's Between the Lines blog. This second webcast will cover Architecture, Engineering, Construction, Utilities, and Geospatial.

Today's webcast showed some of the great new features of AutoCAD 2010. Some of these features were available to Autodesk Subscription Customers with AutoCAD 2009 such as PDF overlays and 3D printing. Since the majority of my work is with a vertical (Civil 3D), I was unable to enjoy these cool new features. These features are now fully integrated into AutoCAD 2010 and that means they will also be included inside of Civil 3D 2010.

My two favorite features of today's webcast are PDF's created by AutoCAD and parametric drawing constraints. I know we've been able to plot to PDF for several releases now via either an AutoCAD pc3 file or third party applications (both free and paid versions). However, let's see those third party applications do what AutoCAD 2010 is doing with their PDF's. Here's a list of a few things you can do with PDF's created by AutoCAD 2010 that were shown in today's webcast:
Now honestly, I'll bet you can't wait to go check out AutoCAD 2010 for yourself. Be sure and keep your eyes on the CAD media, because there are more things being unveiled in the upcoming days.
Posted by TommieR at 8:26 PM No comments:

Just a quick post to let everyone know that the Civil 3D 2009 Update 2 has been posted. You can download this update from the Autodesk website here.

Thanks to Lisa P. for the email notification. I was also notified from Autodesk about the patch after submitting a CER that included my email address.

Another quick reminder to send in your CER's when you crash. It's important for Autodesk to see how often an error occurs and how many folks it affects. This ensures that the problem is given a higher priority level and the chances of it being fixed in the next product update are much greater.
Posted by TommieR at 4:33 PM 3 comments: