How Many Inches in a Meter?

I know that the easiest way to convert your existing template to a new version of Civil 3D is to just open and save the template. However, you will be missing some of the new settings that just got implemented into the new version of the software.

One of these new settings can be found in the Drawing Settings dialog box, Units and Zone tab. There is a new "Imperial to Metric conversion" setting there. It defaults to "International Foot(1 Foot = 0.3048 Meters)" for the OOTB templates. This means that when you open and save your existing template, it will also be set to "International Foot".

So depending on your location and project, you might need to change this setting to "US Survey Foot(39.37 Inches per Meter)". 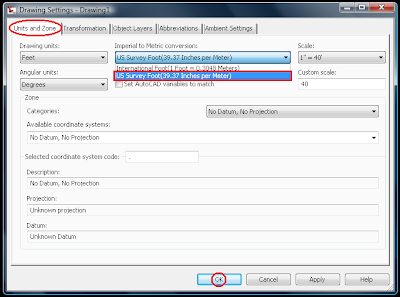 Although it could be found in previous versions, you may not know that there is a similar setting in the Land XML export settings under the Data Settings properties. 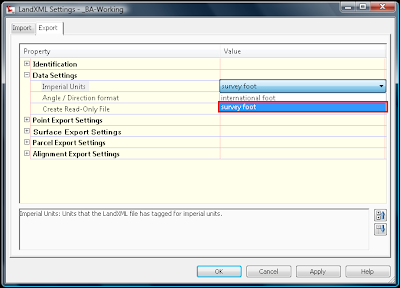 Posted by TommieR at 5:29 PM No comments:

Since I'm already having to use this in Civil 3D 2009, I'm going to post it here so it's easier for me and others to find in the future.

Isn't it frustrating when you get this type of warning message? 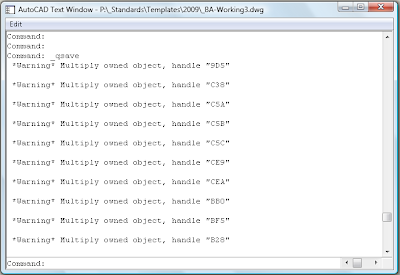 Great. Now what do I do? Is the drawing corrupt? Do I have to start from scratch?

Some discussion forum posts suggest that wblocking the drawing can help. Yes, it does get rid of the warning messages, but you could lose all your styles, object layer settings, defaults, etc. That's not acceptable.

Well, according to Scott's Superman post, there is a command you can type to get rid of the problem object (Replace C5C with the handle shown in your command line):

Since it is possible to lose a style or two by running this command, I'd like to know what I'm deleting. So after a bit more research, I found a link to Shaan Hurley's post about DbView for AutoCAD 2007. I followed the instructions and ran the program. It works with Civil 3D 2009. I only wish someone could a "delete" command button for the selected object.

Here's a few screen captures of the DbView program in action: 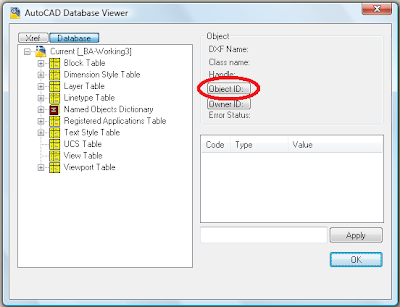 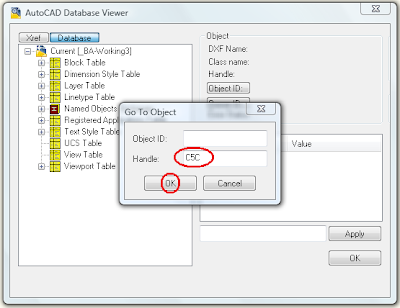 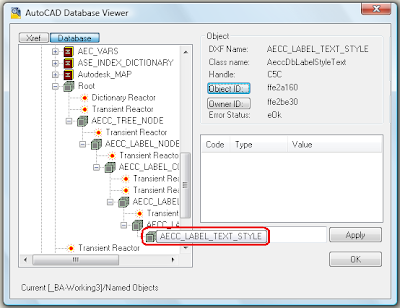 At this point, I would love to give you some great and wonderful insight as to what you're seeing in that last image. Unfortunately, for now all I can do is look at it and see what type of object will be deleted.

As far as deleting the object goes there are several options for running the command from Scott's post.

It seems to me that every time I've seen this warning message, it's always been when I have been dragging styles between drawings. In Civil 3D, it definitely happens when you drag child styles into a drawing that already contains the parent style. This happens even if the parent styles were just created by dragging them from the same drawing. Hopefully it can be fixed with C3D 2009 SP1.
Posted by TommieR at 9:28 PM 1 comment:

Click on Street View to see the locations where street views are available.

Type in a street address including city and state. If a street view is available, there will be a small image of the street view at that address.

Click on the image and you will see an enlarged image of the street view at this address.

There are several arrows denoting directions you can move up or down the street.

You can also rotate right, left, zoom in, and zoom out using the icons

Try this one as an example.

Left click on the image shown, then select the rotate right icon.

You will now see the street view of the Central location of Bicycle Sport Shop in Austin, Tx.

Special thanks to Mark R. for showing me this one.
Posted by TommieR at 8:30 PM No comments:

This is Part 4 of a series on Profile View Label Styles (PVLS). This post may not make a whole lot of sense if you haven't seen the previous posts in this series. Please take a moment to read them before continuing to read this one. Here's a link to each:

To use the Offset Style created in this series, you'll need to create the label style first. (Instructions for creating an offset label style can be found Part 2 of this series.

After the style has been created, right click on the style and select New... in the Settings tab of the Toolspace. For Profile Views, this will create a "Child" of the original style. It will have all the same properties and components of the original style at the time that it is created except those that you change.

On the Information tab, rename the text inside the brackets [child] to [RT-0.3]. That means that we will be creating a style that moves the text right 0.3 inches. Go ahead and left click on Apply then select the Layout tab.

Remember how we deleted the original text so that the first component was "Line for Text". This is where it comes into play.

Go to the Line section and change the Start Point X Offset to 0.3, then Apply and OK. Now place the style in the drawing or change one of the existing labels to use this style instead. Here's a screen capture of the original parent style and the new offset RT child style. 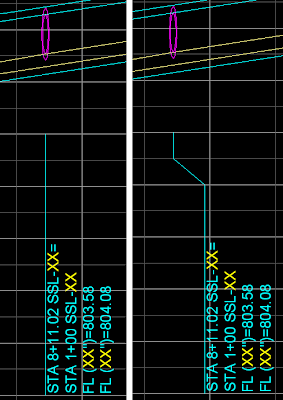 There are other ways to change the style as well. Try changing these values and see how they affect the style:
You should never change the values of the "Offset Connection Line", because they will always follow the start/end of the other lines in the style.

Well, that's it for my series on Profile View Label Styles. I hope you found it useful. Feel free to post a comment if you have questions or if you just want to request a topic for a future post.

This is Part 3 of a series on Profile View Label Styles (PVLS). You should also read Part 1 and Part 2 of this series for additional information.

After you have the style and profiles created in your drawing, the rest is really simple.
So now the label is placed, but there aren't any elevations shown. Here's the secret:
Now you have the flowline elevations and all you have to do is editlabeltext on the style to change the name of the utility line and modify the pipe sizes. As I said in my first post, I'm sure you can take this style further to get the pipe sizes in it. Also, you would need to make a copy of the style and modify the text for grade breaks, and crossing pipes.

Well, that's it for Part 3. In Part 4, I will describe how to use the offset capability that we put in place when we created the Profile View Station Elevation Label Style in Part 2 of this series.

This is Part 2 of a series on Profile View Label Styles (PVLS). You can view Part 1 of the series here.

Here's the step by step guide to creating the Station Elevation Profile View Label Style. The way this style is created will enable you to easily establish offsets in child styles as needed. That will be explained in a Part 4 of this series.
Well, that's it for Part 2. In Part 3, I will describe how to place the Profile View Station Elevation Label Style that you just created.

This is Part 1 of a series on Profile View Label Styles (PVLS). I will discuss how to label the flowlines of connecting pipes in a profile view. Armed with this information, you should be able to create your own style that shows flowlines of pipes at crossings and at changes in pipe sizes.

Well this is one label style with which I've been wrestling for some time. Then while creating an offset label style the other day, it just hit me how easy it would be to get the two flowline elevations into one style. Now, at this point, the pipe size in this particular style has to be edited manually, but maybe this style might give you some ideas on how to get everything you want labeled automatically.

The first thing you need to do is create a profile style with Line, Circular Curve, Symmetrical Parabola, and Asymmetrical Parabola component types visible, but on a "no-plot" layer. For my style, I've create a layer called _no-plot-profile and set the Plot property to "No". 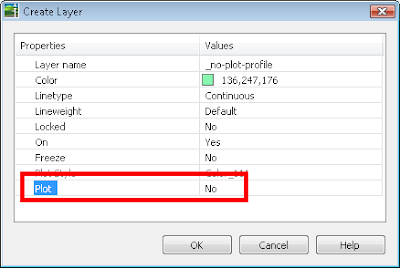 Now create a profile by layout that follows the flowline of the main pipe in your profile view. Be sure to use the "no-plot-profile" style that you just created. This profile can also be used to label your pipe flowline elevations (such as the elevations shown in a band style).

Now create a second profile by layout that connects the flowline of all your crossing or connecting pipes. You can also tag the end of the smaller pipe at a pipe change (since a profile can't be exactly vertical). The second profile should look something like this: 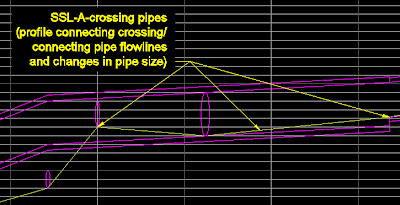 Here's a zoomed in view of the three major locations where I use the "crossing pipe" profile. (Just click on the image to see an enlarged view.) 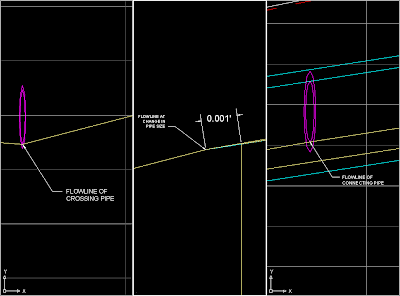 Well, that's it for Part 1. In Part 2, I will describe how to create the Profile View Station Elevation Label Style.